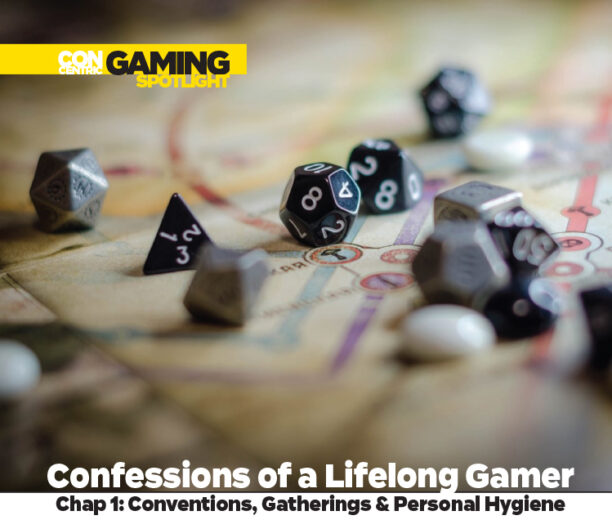 Hey friends, as a lifelong gamer and “conventioneer” of more than 25 years let me share some of my convention insights and increase everyone’s wisdom. Some people may know it as the 5-2-1 or 6-3-1 rule for conventions and/or gatherings in general, these rules work for both. That stands for 5/6 hours of sleep, 2/3 meals and both rules highly recommend at least one shower or bath per day.

Five to six hours of sleep should be an easy one to follow since everyone is usually beat after a long day but get some rest so you’ll be awake and alert for the next day. Eating two or three meals a day should also be a no-brainer as in addition to sleep we also need energy to keep going. And last but definitely not least no one wants to be next to someone else who smells of the gamer funk and since most games are usually played in close proximity to others, please for your fellow gamer or attendee next you, follow that rule.

Also remember when “sitting down” at a game especially with people you don’t know yet, everyone and I mean everyone at that table wants to game with you. Don’t be shy, through all my years I have found that gamers are among the most hospitable and inviting of people as they enjoy sharing their hobby with others. It doesn’t matter if it’s an old school role playing game or someone’s “home brew” rules, the latest Kickstarter mega-boardgame or even a historical miniature game, YOU are welcome at that table. Gamemasters go out of their way to prepare the game for new and experienced players alike and they’re hoping you’ll like it enough to join a regular game group or even start your own.

I would say that 95% of all games at conventions are designed to be played with no prior knowledge of the game or its rules. And I doubt that half or more people at that table don’t know all the rules, so saying “I don’t know the rules” is not an acceptable excuse because neither does anyone else.

So get some rest, grab some food, take a shower/bath and sit down at a new game with complete strangers and I’ll be willing to bet, once the game is over, you’ll have made some new friends and might have found a new favorite game.

Until next time, GAME ON!

PLAN AHEAD! Most shows announce their dates sometimes...

A staple of the convention lifestyle are the...

At the tip of Florida’s panhandle the small...

When/where was your first convention experience, what got...